From Deprivation to Destitution: The story of Mumtaz Begum 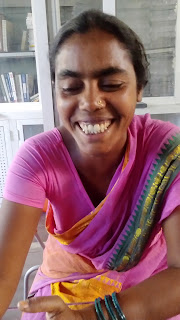 "I have been asked not to smile at the camera because someone who has been rendered homeless again and again should not look happy," tells me 36 year old Mumtaz Begum. But I ask her to smile for me, and why not, I said, everyone has the right to be happy. So, keep fighting your fight, I told her.

Mumtaz's family is one of those 383 families in Topsia, Kolkata who were forcibly evicted by the government of West Bengal in 2012 for the construction of a flyover. "The goons were sent to us and they threatened us to leave. They said we will rape your daughters, will set your house on fire. I didn't want to leave initially, but slowly fear took over and I left my home with my family."

The said forced eviction happened on 7 - 12 Nov 2012, when the slum dwellers of about 2,000 people living under Topsia Bridge No 4, near Park Circus Station in Kolkata, looked on as their homes were demolished without prior notice, without any legal procedure. The affected people were mostly from low income group, from scheduled castes, other backward classes, minority Muslim population, and many were from freed/denotified tribe communities. They lived mostly by rickshaw pulling, daily wage labour, begging, rag-picking, etc. 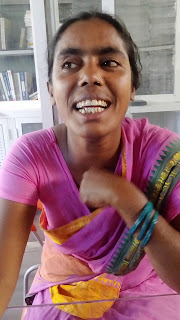 
"We now live in Lohapool, near Topsia. There are about a total of 55 jhuggis in Lohapool. We were not allowed to relocate there by the residents. This slum is by the railway line. If you come to my house, you will see that the railway track is just a step away from the threshold of my house. On two occasions, I was almost hit by a train when I stepped out of my jhuggi. It's that close! My husband is an alcoholic and there were a couple of times when he was almost run over by a train, just outside our house!"

"I very recently got my 14 year old daughter married. I wanted her to study and come out of the cycle of poverty that I have been living. But with this relocation to Lohapool by the railway track, and Ghutiarisharif (prostitution den) which is nearby, I feared for her. So I got her married to a guy nearby who will protect her." What does he do, I ask her. He is a rickshaw-puller, she replies. 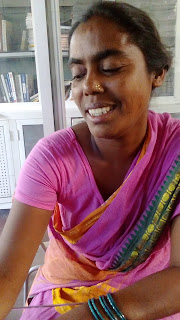 Leading the fight for the basic human right to housing

"When I was 21 days old, my parents came to Kolkata to save themselves from poverty. We lived on the Sealdah platform and my parents begged for a living. One day my mother met a woman and she said there are people living in jhuggis in Topsia, come with me. My mother paid Rs 400 to the CPM guys and we were given a place to build our jhuggi." Were you given any document, I asked. No, she said.

"When I was 13 years old, that slum was destroyed by the CPM, for the construction of a flyover. That was the first time we were rendered homeless. I saw children dying under the bulldozers. The police came and beat us up. We organised a campaign but nothing happened. We lost everything then, whatever little we had." 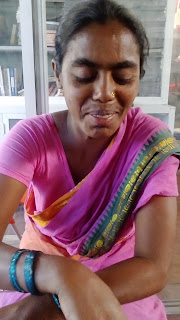 I ask her, what about toilet facilities. None, she says. "We crap on plastic sheets out in the open, by the railway tracks and throw it away in the garbage. We go without bathing for days. I took a bath yesterday at the hotel (in Delhi where she is staying these days) and I felt so good!"

Mumtaz has been brought to Delhi by Apne Aap Women Worldwide and Housing and Land Rights Network (HLRN) to release the report 'From Deprivation to Destitution: The Impact of Forced Eviction in Topsia, Kolkata.' The report was launched yesterday at the Indian Women's Press Corps in Delhi. She was accompanied by renowned activist Anuradha Talwar, celebrated writer and activist Harsh Mander, Shivani Chaudhry from HLRN, and Tinku Khanna from Apne Aap Women Worldwide.

Tinku Khanna introduced Mumtaz as "the leader and organiser of the movement at Topsia." 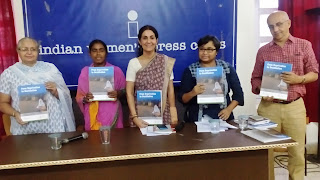 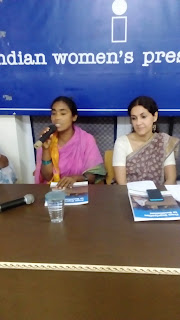 Mumtaz addressing the gathering at the press release

Anuradha ji, in her speech, stated, "We felt with the new government coming in, there will be a change in the attitude of the government towards land acquisition and housing and land rights of the poor. But what is happening in West Bengal right now, as is evident in the Topsia case, is that the government is undertaking illegal proceedings to acquire land. For example, at Topsia, the evicted population was given a compensation of Rs 12000. But there is  no document from the government to state why this Rs 12000, how it has been arrived at. Even after 4 years, there has been no response from the government for adequate compensation."

Harsh Mander pointed out, "The peopel who build cities are considered illegitimate residents with no rights. Cities are not planned in a way that its working population can live dignified lives. And since that doesn't happen, they are forced to sleep on the streets and live in slums. And when you live in a slum, there is a danger of the state turning against you. And when the state uses non-state actors, especially the mafia and goons, it causes a situation of helplessness, of injustice and inequality. Our acceptance of this inequality and injustice is extremely unacceptable. Cities need to be built in a way that they are inclusive of the poor."

Shivani Chaudhry vociferously argued that, "In the international law, housing is a basic human right, but unfortunately the central and state governments don't recognise this as well as the linkage of housing with multiple other human rights. If you are a pro-poor government, you will never push the marginalised to poverty and destitution."

The report points out, as Tinku Khanna mentioned in her speech, how the forced eviction has not only amounted to severe material and non-material loses for the poor who were living in that area, but how no rehabilitation plan for the affected population has resulted in many relocating to places like Ghutiarisharif where there are two brothel systems running, Lohapool by the railway tracks, thus exposing women and girls to the vulnerability of being trafficked for prostitution and other forms of bonded slavery. The report carries account of missing children and women after the eviction.

But the bottomline is, should development take place by excluding the poor? As Mumtaz tells me, "We also want the country to develop, but not like this when 383 families are just thrown out of their homes with nowhere to go." And as Anuradha ji says, "The issue is the city, Kolkata in this case, where there has been a surge of development activities along with carelessness in the manner in which this development is happening."

This piece has been published later by The Thumb Print on 21 April 2016, and is available at (http://www.thethumbprintmag.com/the-story-of-a-forced-eviction-in-kolkata/)
at April 14, 2016

My 7 year old daughter wants to start a video blog. I asked her what she wanted to do with it. She said, she would describe the books she l...